Integrating GREE into your cocos2d(-x) game ! 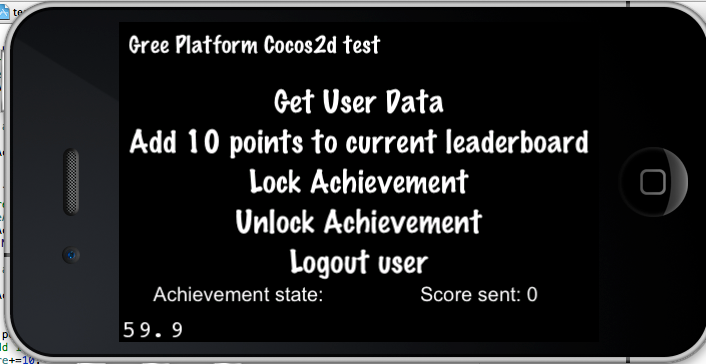 UPDATE 2: I recommend following the official guide from GREE’s blog !, since it’ll always be up to date (I guess)
UPDATE 1: I’ve now updated the tutorial to support cocos2d-x !, thanks to the readers who’ve helped out !

Okay, A couple of the readers on the last GREE post requested that I do this writeup to show you how to implement the GREE platform into your cocos2d game !
So, here it is folks !

Note: if you just want the code immediately, here’s the download link !, for everyone else, read on!

UPDATE:I have accidentally removed the files while i was updating to my new computer, i’ll try to find them and restore the link As soon as I can, sorry guys 🙁
Download the XCode project here

Ok, now I assume you’ve setup the app on GREE and obtained the ApplicationKey, ConsumerKey and ConsumerSecret strings !

Let’s begin by creating a simple cocos2d game !, fire up Xcode, then create a new project (Shift+Cmd+N) and select the cocos2d template. Fill up your product name and company identifier, for this tutorial, i’ll just create one scene with a menu that’ll control GREE.

Now you should have the skeleton app ready to run, run it in simulator to make sure you see the Hello World scene, if it looks like this, you’re on the right track !

We’re done with the first step, second step is to add the GREE library to your App

Head to GREE’s developer dashboard, and download the latest SDK (3.1.1 at the time of writing)

AFter downloading, we need to do the following

First, we’ll add the SDK to our project, to do so we need to do one of the following ways :
First method is the easier one, we simply copy two library archive files (something similar to DLL files in windows), those are precompiled files that contain the entire SDK header files and code.

Simply go to your newly downloaded SDK folder, find the files calles libGreePlatform.a and libGreeWallet.a, then drag them into your Xcode window so they’ll be added to the project.

Next you need to import the vendor/ folder, just in the same manner, this contains some extra libraries that Gree requires !

NOTE: There might be some extra example XCode projects inside the vendor folder, make sure to delete them as they contain similar filenames that confuse Xcode.

The second method to add Gree is to copy the resource files as a tree, meaning, copying the files and folders individually into your project (I this gives you access to open up the SDK and read the internals when needed, it’s totally up to you which method to use)

To add the SDK as a source tree, simply find the  SDK/ folder, and drag the source/ folder into your XCode project. we will need everything inside this folder.

Once it’s in your project, you may rename the folder to something more appropriate, like libGREE.
if you like an organised hierarchy, move the libGREE folder into the frameworks folder.

Now we are done with adding the SDK, we need to add the resource bundles now (bundles containing images and UI elements required to display GREE’s dashboard,popups and banners properly).

Resource bundles are found in the release/resources folder, head in there, and drag the file “GreePlatformCoreResources.bundle” into your project just like you did before, ask XCode to copy the file if needed. you may move it into the “Resources” too if you want to keep it organised !

Note: You probably have noticed that there are two other files, one for landscape resources and one for portrait resources, If your app is landscape or portrait only you can copy any of those files too (i prefer just using the core as it’ll save space)

Now we have resources ready, and code ready, what’s next ? adding the builder flags !

Scroll down to the “Other Linker Flags” row, and add the flags “-ObjC” and “-all_load” if they’re not already there.

Note: please make sure they’re there on both Debug and Release configs, just hit the arrow to expand the row and see if it’s the same like this:

Now we’ve added the platform fully !, the next step is to add other frameworks that GREE requires to work properly, that’s simple and won’t take a moment !

Go to the “Build Phases” , next to the tab “Build Settings” you were just on, and scroll down to “Link Binaries with Libraries”. Tip: To easily find the framework use the search box !

Now we’re done with adding the framework !!, we need to head next to our code to initialize it !

Let’s head into our AppDelegate.h file, and start working, firstly we’ll need to include the following:

The head to it’s @interface line and make it follow the GreePlatformDelegate protocol by modifying it to :

Now let’s go to the AppDelegate’s .m file and do some work there !

First thing include those files

Note: GreePlatformSettings.h is not mentioned in the docs, but it contains the setting’s enums and constants, i’m not sure why this bug occurs, but we have to import that file manually, no biggie..

Now head to the end of your applicationDidFinishLaunching method, that’s where we’ll init the platform.

To init, we need a settings dictionary, and your appId and consumerId/Secret.

Create the Dictionary as follows:

Then Init the platform as follows:

Also, in the applicationWillTerminate method, make sure to shutdown GREE

At this point,  XCode will have probably started warning you about missing methods in the Gree delegate protocols, they are cool methods that allow you to do actions when the user logs in, out, or the dashboard appears, disappears, etc..

just add those methods to your AppDelegate.m file, anywhere you want.

At this point you are ready to run and test !!, ready ?? (CMD+R)
Take a look at your console, it should say something like this:

This means the platform was init’d correctly !, congrats !!

You’re probably wondering, why didn’t I see the dashboard ??

Cause we haven’t setup the RootViewController properly, head back a few lines up in your AppDelegate’s m file (anywhere actually)

And set the RootViewController property, depending on your cocos2d version, it will differ, here’s for both versions:

After creating that, your code is “almost” ready, the thing is, you haven’t asked GREE to authorize the player, you just initialized it, in order for the dashboard to show, you’ll need to call the authorize method, anywhere you need (preferably right after init method ??, we’ll change that later in the tutorial anyways)

Now Login using the new credentials, voila ! you’re in GREE !, you may close the app and restart it, you’ll notice it greets you in a “welcome back, username” manner , just like OpenFeint and Game Center, nice..
Now you’ve earned a little break, go grab a coffee, when you’re back we’ll start modifying your cocos2d scene to play with GREE’s methods (Achievements and leader boards)

Okay, let’s go, fist thing, I don’t like the way the login is handled, so please remove the line that you just added

And let’s handle it in a better way, we want the user to start the game, and if he/she aren’t logged in, we show them a login button that’ll call GREE’s dashboard, this way, we avoid annoying the user with popups (I hate that).

We’ll handle those in the .m file, open it up now..

Clean out the scene from the Hello World  label and everything, we want a clean empty scene..

Then add a new interesting title:

Now let’s do a little check to see if the user is logged in or not to display the corresponding menu !

as you noticed I created a new method called authUser, you’ll need to add that into your class:

Anywhere will work, but i prefer before the dealloc method (to keep things organized, i don’t know why but i like the dealloc to always be the last method)

Now run the game, you’ll be greeted with a nice empty scene with a login button, press the button, if the user never logged in before, it’ll ask them to register, if they’re already registered, the button will just disappear and the user will see the welcome back banner, this is a little tricky, cause now since the user is registered, you can just automatically call the auth method and they won’t see any annoying popups, i’ll leave that to you since you’ll know your game’s implementation better than i do, the easiest way is to simply call the auth method right after you init the Gree platform, but you must understand that the first time the player runs the game, they’ll see an annoying registration popup, keep usability in mind..

Now it’s time to create all the controls, we’ll create a menu that contains items to:

And a few labels to display all that data

Head into your HelloWorldLayer .m file and let’s begin by adding the menu:

inside the user logged in check, place the following code:

Now we have a menu setup that will call methods to do what they’re supposed to, let’s add those methods :

First method, is the getUserData method:

Second method is the unlockAch method:

Next one is identical, but relocks the achievement

Fourth method posts incremental scores to a leader board:

And the final and simnplest one, logout the user !

Don’t forget to replace the ACHIEVEMENT_ID and LEADERBOARD_ID with your respective values !, I’ve placed macros on top of the file for ya !
Now Run your app and give it a  shot !, there might be simple changes in the downloaded project than in this tutorial, but simple stuff like the
displayScale variable, it just helps with font sizes on iPad and iPhone and some positioning, etc… so don’t worry about those little changes..

This is considered a simple tutorial, it doesn’t show you how to fetch data from leaderboards, or fetch Achievement data, I just did it

to explain how the project needs to be built and to give some users having difficulties a ready made skeleton app to work on !

it also doesn’t show the GameCenter integration, I can add that later but i had no time as I’m contracted on a game that i’m supposed to finish soon..

sorry about that, if i have some more time i’ll make sure to post about GameCenter integration !

if you found any mistakes or want to make amendments please comment or email me ! 🙂

Some previews of how the app will behave: So , Stuart Templeton was working on integrating GREE with cocos2d-x, he did the whole thing flawlessly, except for a little error that cause the keyboard to popup

after some fiddling around the internet, I found out that it’s a little bug in cocos2d-x in the EAGLView, thankfully Andre Rudlaff has patched this !

so after applying his patch, the rest was simply just  exactly like Cocos2d-iPhone !.

UPDATE:I have accidentally removed the files while i was updating to my new computer, i’ll try to find them and restore the link As soon as I can, sorry guys 🙁
Download full Cocos2d-x project here

Enjoy, don’t forget to leave comments below if you have any questions !